The Bold and the Beautiful

The Bold and the Beautiful, which debuted on the fourteenth anniversary of The Young and the Restless's premiere, is a daytime drama series about intrigues and romance in the world of fashion. This show's main title sequence reflects that theme quite well. 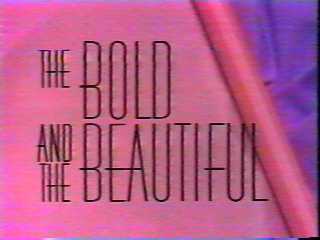 To the sound of whining saxophones, The Bold and the Beautiful's opening sequence begins with a tight shot of a camera lens being adjusted by a photographer, followed quick cut shots of models in fashion poses. Then we see in rapid succession posed photo stills of each cast member in a character-appropriate setting in the Los Angeles area. The whole sequence ends with a shot of a rollup style ladies fan unfurling to reveal the title of the show in black Huxley Vertical type.

The theme song, by Jack Allocco and David Kurtz, is saxophone-dominated, fast-paced, and sophisticated. Starting in early 2001, however, a revamped arrangement of the B&B theme was played over the opening. It is a toned down version of the original.

In November 1998, the show began to run over its end credits a vocal version of its theme song ("High Upon This Love") performed by Dionne Warwicke. This vocal close was used in the United States until the end of July 1999, when all the CBS soaps started showing generic "squeezed" end credits accompanied by promos.

On Friday, July 2, 2004, The Bold and the Beautiful totally revamped its opening.  This new opening begins with an image of a fashion magazine cover with the new B&B logo in the upper left hand corner, followed by shots of each major cast member accompanied by his/her character name.  The last image of the new opening is the new logo, B&B in white letters inside a red rectangle, over a black and white shot of a woman’s eyes.  I would like to thank Cubedude for alerting me to the new opening:

Thought I'd share links with pics and info on the new Bold and Beautiful opening that debuted Friday, July 2, 2004: screen caps on my site at http://homepage.mac.com/cubedude/PhotoAlbum25.html and video in Windows Media Format at http://www.soapcity.com/bb/specials/specials_detail_25200032.jhtml

From 1987 until around 1994, the end credit sequence had the title of the show in the lower left-hand corner of the screen and the actual end credits, in a flashing separate card format, on the right side. End credit lettering was in the same Huxley Vertical type as the title logo, and everything was predominantly in white lettering against a black background.

Starting in 1994, the end credit lettering changed to Gill Sans, and the end credits were now shot against panoramic Los Angeles-area backdrops. This format lasted until the end of July 1999 in the United States. In Canada, however, the correct closing sequence with the Los Angeles scenery is still used, along with an upbeat and expanded instrumental version of the main theme featuring piano and probably a clarinet. The non-squeezed end credits are probably also still used in overseas airings of The Bold and the Beautiful.

Here are some Bold and the Beautiful web pages you may want to visit:

Mary's "The Bold and the Beautiful" Fan Site at http://www.rollanet.org/~mary/bb/bb.html

The World of the Bold and the Beautiful at http://ourworld.compuserve.com/homepages/Scott_Novick/bb_home.htm.

Ayelet's THE BOLD AND THE BEAUTIFUL Fansite--The address is http://www.fortunecity.com/lavender/candyman/96