The Brighter Day only lasted eight years on television, but it was one of the most cherished of the early television soaps. Created by Irna Phillips, this show focused on the family of the Reverend Richard Dennis.

During its radio run and during its first couple years on television, The Brighter Day opened with the following epigram:

Our years are as the falling leaves. . .we live, we love, we dream. . .and then we go. But somehow we keep hoping, don't we, that are dreams come true on that Brighter Day. 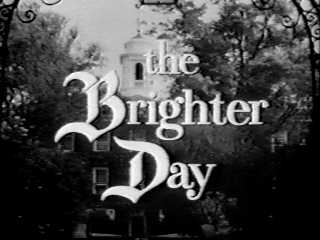 The only Brighter Day opening visual I've seen in my research is the one that was in use by 1960. In that one, wrought iron church gates swing open as the title zooms out at us in a mixture of calligraphic initials for the "B" in Brighter and the "D" in Day and a Times Roman font for the remainder of the title words. By 1960, the above epigram was no longer used.

I've also seen mention in one soap opera message board of a Whitman-sampler style needlepoint picture of a house that was used in earlier seasons. I certainly need more information about other openings for The Brighter Day.

In 1960, end credit lettering was in a rather lightweight Futura Condensed font.

Here is a listing of some of the theme songs used during the run of The Brighter Day: