only had a rather brief run, but during most of its five years on CBS Daytime, it was the highest-rated half-hour soap opera. It was also one of the few soaps set in a real life locale, more or less. (Capitol's fictitious Washington D.C. suburb of Jeffersonia is probably modeled on Arlington, Virginia.) 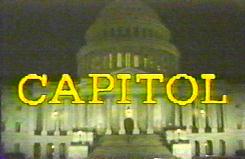 first opening sequence began with a graphic of the United States flag. Then the blue star-spangled portion of the flag, which is in the upper left hand corner of the screen, pulls out toward us and becomes a window containing the first image of the main montage sequence. This montage is a series of scenic shots of Washington, D.C. This sequence ends with a nighttime shot of the U.S. Capitol building as the name of the show appears in bold yellow typewriter style lettering.

The end credits ran over the same nighttime shot of the Capitol building, followed by the John Conboy Productions logo: a stylized JC.

Bob Israel's accompanying theme song in D# major, which was highlighted by a rhythmic Tut-tut-tahhh (Ca-pi-tol!) signature, had more of a primetime sound than most soap themes of the early 1980s. 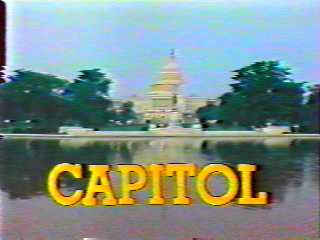 The following was the longest running opening sequence in the brief history of Capitol. It starts with the title of the show in white A&S Gallatin Bold (Memphis Bold) letters against a blue background. Then the title pulls away, as does the blue background to reveal a computer graphic image of the U.S. flag. Then the flag pulls away and merges with a live action flag atop the Capitol building. We go from there to a sequence of aerial and other shots of the Lincoln Memorial, the Washington Monument, the Jefferson Memorial, and other Washington D.C. landmarks. Near the end of the sequence, we see a limo pulling up in front of the White House, followed by a daytime view of the Capitol building as seen from the Mall and reflecting pool. With this final image, the name of the show appears in the lower part of the screen in yellow A&S Gallatin Bold (Memphis Bold) letters. 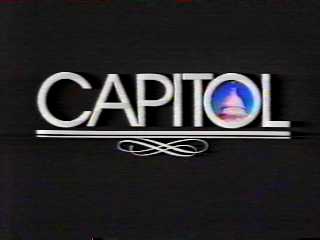 In early March 1986, soon after the show's 1000th episode, Capitol completely overhauled its opening, most likely in an attempt to arrest a serious ratings decline. The new opening, which was designed by Phil Norman, starts with a posterized shot of Capitol building inside the O of the word "Capitol," which is now set in white Avant Garde Gothic Demi lettering against a black background. The familiar aerial photos of Washington D.C. landmarks are in this opening, but now they're augmented by photos of anonymous actors in mime. At one point, there are a couple simulated camera flashes over a shot of a young Washington power couple. Every now and then there is a slit-scan generated wash of red, white and blue through an abstract representation of the White House exterior. The whole sequence seems to be a dramatization of a CBS Daytime slogan used to promote Capitol in the 1985/86 season: "The power of passion and the passion for power."

The theme music was also thoroughly revamped in a new more militaristic arrangement that starts in G major and ultimately modulates to F major, punctuated by that familiar Tut-tut-tahhhh (Ca-pi-tol!) signature.

Phil Norman won a Daytime Emmy Award nomination for his revamp of the Capitol opening.

Here is one Capitol-related website you may want to visit: