had only a very brief run on NBC, but it was notable for being the first network daytime soap to begin its run with a black (African-American) core family.

used only one theme song during its brief twenty-two month run on NBC. During the preproduction process, Generations executive producer and creator Sally Sussman considered numerous theme song candidates, including one devised by Rick Rhodes and Dominic Messenger. Here is the story as related by Mr. Rick Rhodes:

When they were in preproduction for this show, and Dominic and I were working down the hall at studio 11 (Santa Barbara), I came up with a fantastic idea to propose as a theme for Generations: Why not start the music with a solo ragtime piano, move through the big band era then to the fabulous 50's.....then modern pop music all the time using the same thematic element!!!!! The executive producer, Sally Sussman loved the idea. Dominic Messenger and I wrote and arranged it, played it for her and never heard back from them.

A month later, they selected a theme by Michael Gore that used the same concept but was a different piece. It really hurt! 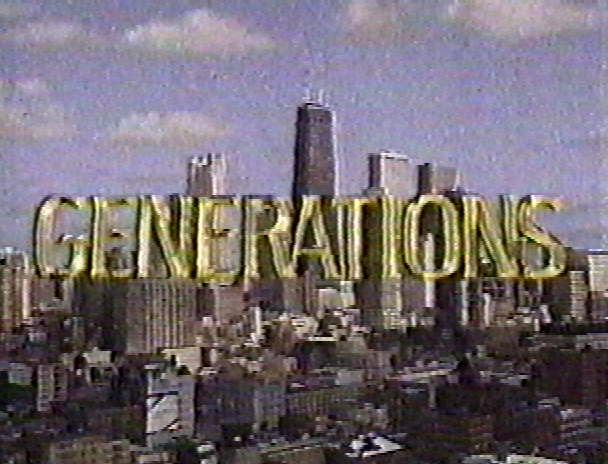 The accompanying opening visual sequence begins with a series of black and white, color, and tinted photos of scenes from American history (i.e. the civil rights struggle, the wars, soldiers returning from Vietnam, etc.) Next are group photos of the main storyline families--the Whitmores and the Marshalls. These are followed by a shot of the Chicago skyline as the title of the show comes in horizontally as a flat three-dimensional gold bar, then flips upright just as the Chicago skyline dissolves to a realistic drawing of a tree against a greenish-tan background. Through animation, two smaller trees emerge from either side of the main tree to illustrate the generations motif. A shorter version of this opening included only the last two visuals: the Chicago skyline and the tree drawings.

The show's end credits ran over the shot of the three realistic tree drawings that ended the opening sequence. Cast members were billed in alphabetical order as I recall.