General Hospital is ABC's longest-running daytime drama series. It premiered on the same day as another medical drama soap, NBC's The Doctors.

Part One: The Early Years 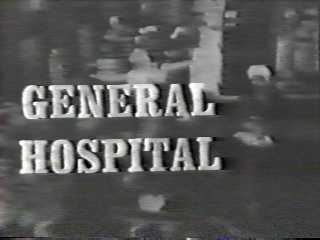 In at least the first episode of General Hospital, the opening sequence begins with a close up shot of the medical profession's serpents-on-a-staff logo sculpture on a wall. Then the camera slowly pulls away to reveal nurses and doctors walking through the nurses' station on their rounds. The picture freezes and turns into a negative image as the title of the show appears in white Craw Clarendon Condensed lettering. The theme music, composed by original organist Kip Walton, was a rather expansive piano piece.

In later seasons, or at least from late 1964 to July 1976, there would be a pre-main title scene, at the end of which the title would be superimposed over the visual (a la The Doctors). The title would stay on screen for a few seconds as the scene in the background faded to black (or blue after General Hospital began broadcasting in color).

In the spring of 1975, Kip Walton's original General Hospital theme was replaced by a new theme composed by the show's longtime organist George Wright. This theme lasted until July 1976 at the latest.  Probably at the same time George Wright’s 1975 theme debuted, the long-running main title visual of an ambulance rushing through the gates of the Los Angeles County-USC Medical Center, followed by the title of the show zooming out toward us.

The longest-running main title of General Hospital's entire run had a visual that was already in place over a year before the show expanded to forty-five minutes. The end of the last pre-main title scene dissolves into a shot of an ambulance rushing through the gates of the Los Angeles County-USC Medical Center, followed by the title of the show zooming out toward us. The title is again in white Craw Clarendon condensed lettering, just as in the 1963 to 1976 openings.

The new theme music, "Autumn Breeze (a.k.a. "Theme from General Hospital")" by Jack Urbont, sounded very closely modeled on David Raksin's Ben Casey theme. Both were in the G major key, both were brass-dominated, and both featured major ninth, thirteenth, augmented and diminished chords.

The end credits were set in the same Craw Clarendon Condensed type as the title logo. On some days, not unlike The Doctors, the credits would list after the production principals a handful of major cast members on separate cards. On long crawl days, cast members were usually grouped based on seniority and current storyline ties. 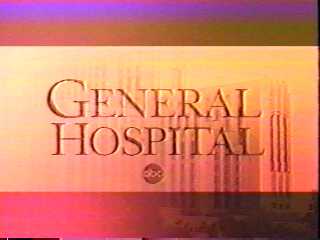 Wendy Riche took over as General Hospital's executive producer at the beginning of 1992. Over a year later, she would make her most visible change as she decided to retire the long-running 1976 opening in favor of something new.

The new opening debuted at the beginning of the April 1, 1993 episode that marked the show's thirtieth anniversary. The theme begins with a heartbeat rhythm played on a bass guitar as we dissolve to a shot of an ambulance. That, in turn, dissolves into a tinted, letterboxed view of the exterior of the LA County-USC Medical Center. This is followed by a series of video headshots of all the contract cast members, either solo or in pairs, against a black background. After every few clips, there is an action clip from the show. At the end of the sequence, we go back to the letterboxed, tinted hospital exterior and the title of the show in Goudy Bold type.  During the 2002-2003 season, the characters’ names were added to the opening.

For awhile, the end credits remained in the same Craw Clarendon Condensed type used in past years. Now, however, the long crawl was done over stills from that day's episode. From 1996 to 1999, each end credit segment was done in smaller lettering on a separate card for each still.  The separate card setup is still used in the end titles shown on SoapNet rebroadcasts, but the credits are done over a shot of the hospital.

During the May 2004 sweeps, ABC Daytime began a significant re-branding process. New graphics and new promotional bumpers were created, and the visuals in the new promos were incorporated into new openings that were unveiled on all three ABC soaps in subsequent weeks.  On August 30, 2004, GH unveiled a new opening that incorporated many of the character visuals used in a new set of ABC Daytime promos and bumpers that debuted in May 2004.  The nods to the show’s past seem quite minimal in this new opening as we get only an extremely brief glimpse of an ambulance and an almost equally brief upward pan of the hospital exterior.  This new opening sequence ends with a shot of the male cast members clad in tuxedos and posing against a white background, followed by the name of the show appearing in white letters straight across the screen against a black background and framed by letterboxing.

The end credits for GH shown on SoapNet are the same as those used before the ABC Daytime rebranding.  Same visuals (based on the 1993-2004 opening), same lettering, etc.

Here is a list of the themes used by General Hospital during its run on ABC:

Here is one great General Hospital website you can visit: