As the longest-running soap opera of all time, The Guiding Light has had a wide variety of different logo images and theme songs. This show has always sought to redefine itself for each new generation of viewers. Earlier Guiding Light logos stressed the religious aspect, while more recent ones were more secular and emphasized romance, excitement, and pleasure.

Part One: The Early Television Years

During its first fifteen years on CBS Television, The Guiding Light used as its theme music an adaptation of "Romance from Wieniawski's Violin Concerto # 2 in D Minor." This theme music accompanied a number of different logo images.

Even though the following image was probably never used as an on-air logo, it is an example of the advertising used in newspapers and magazines to promote Guiding Light in the early years: 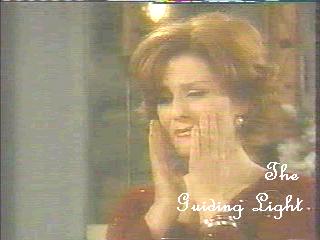 The Guiding Light changed its opening logo and theme music when it went from black and white to color on Monday, March 13, 1967. The new theme music was an original composition by the then new organist for the show, John Gart. From March 1967 to September 1968, according to soap opera historian John Kelly Genovese, GL opened with a shot of a major character posed in the mood of that day's episode. One fan of GL  e-mailed me with the following memories of the 1967/68 opening:

. . .The program opened on a close-up of one of the character's faces against a black background. . .the announcer proclaimed the title, and the music swelled, as the camera remained fixed in a very tight shot of an actor or actress' face (normally with a very intense expression--I particularly recall Ed Bauer), after which the title was superimposed.

Also, the title of the show appeared in small cursive lettering in the lower right corner of the screen.

The Gart theme may have been, in its long version, a waltz tune in F-major, according to my recent correspondence with soap opera historian John Kelly Genovese. Closing credits in the 1967/68 season were accompanied by a shot of a lighthouse beacon.

I still need to confirm facts about GL’s opening visuals from September 1968 through early 1970.  The opening for that period may have been a lighthouse visual different from both the 1970-1974 version and the 1974/75 version.

From around Monday, January 5, 1970 until early 1974, The Guiding Light opened with a new color lighthouse shot. According to Mr. Genovese, "The title was in smallish, simple caps at the left of the screen.” Also, the nighttime sky had a bluish hue. This visual was accompanied by a new theme in F# Major called "La Lumière" by Charles Paul, who became GL's organist in the summer of 1969. This theme, originally played on the organ, was updated in early 1974 in a recorded orchestral arrangement.

At the time of the switch to a pre-recorded orchestral arrangement of “La Lumière,” the lettering of the show's title changed to a pseudo script font as part of an entirely new lighthouse at night visual.  The 1974/75 lighthouse’s visual sky backdrop had a red-orange hue.

Mid program breaks were accompanied by a short Charles Paul composition titled "Rue D'Or," which is French for "street of gold." (By the way, "Rue D'Or" was also, in a slightly different arrangement, the theme for the character Peggy.) Over the long crawl end credits, "Rue D'Or" was used in medley with "La 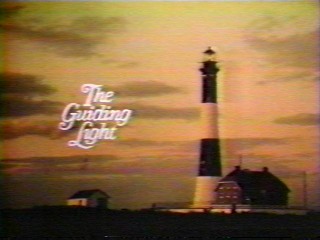 Lumière," with "Rue D'Or" serving as a middle section.

By the time the "La Lumière" opening debuted, Alan Berns had become The Guiding Light's announcer, a position he would hold until the spring of 1997. 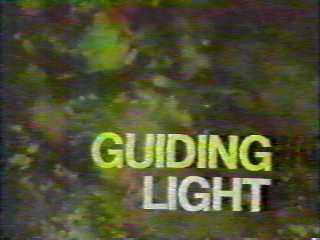 The premiere of The Young and the Restless in 1973 and the popularity of its theme music resulted in a daytime revolution. Several soaps changed their openings between the Fall of 1973 and the summer of 1976 in an attempt to incorporate easy listening pop ballad theme songs. The Guiding Light was no exception.

On November 5, 1975, a new theme song by Charles (or Dina) Paul debuted. The theme was titled "Ritournelle," which is French for "harping on the same tune," and the original version had a wordless vocal chant by a female voice over a repeated harp figure. The accompanying visual was a shot of sunlit flowers and tree branches and the words "GUIDING LIGHT" set in modern Helvetica Bold type and positioned in the lower right-hand corner of the screen.

By the beginning of 1977, the female voice chant was replaced by a high semi-muted violin rendition of the theme melody. This beautiful "harp and strings" rendition of "Ritournelle" would run until the end of 1981.

From 1976 to 1980, the end credits ran over a shot of the sunlit flowers and leaves from the opening. The 1980/81 season closing sequences featured a shot of an Emmy statuette slowly revolving on a turntable against a black background. The end credits were set in Helvetica Bold with the credit in gold and the name of the cast member/production staffer in white. By the late 1970s, GL's long crawl cast list would always begin with senior cast member Charita Bauer (Bert), usually followed by Millette Alexander (Sara) and Don Stewart (Mike) in precisely that order. Also, I get the impression that before 1982 the rest of the GL cast was billed in order of seniority. In the fall of 1981, Procter and Gamble decided to change the openings on most of its soaps to make them more competitive with the dominant ABC soaps and to update their visual look. As part of the change, Guiding Light briefly went disco.

A new splashy disco-style theme by Jack Urbont now accompanied a main title that started with a burst of light from the middle of some round, amber-colored abstract glass sculpture. What followed was a parade of clips from the show featuring action-packed scenes and close-ups and two-shots of all the main characters. The sequence ended with a return to that abstract light sculpture as the title of the show came up in gold and white metallic wedge-like italic letters.

The end credits, which were now set against a revolving abstract glass sculpture with twinkling lights, remained in the same gold and white Helvetica Bold setup as before. However, except for three main cast members (Charita Bauer, Millette Alexander and Don Stewart), the cast was now billed in alphabetical order. The strict ABC order setup for the cast credits remains in effect to this day.

The short-lived Urbont theme and its accompanying opening and closing visuals debuted by no later than January 4, 1982.

When Gail Kobe took over as Guiding Light's executive producer in March of 1983, she quickly instituted a more sweeping overhaul that included new cue music by Elliot Lawrence Productions and a new theme song.

The new theme, "My Guiding Light" by Rob Mounsey, was originally done in a full-orchestral Eb major arrangement. This new theme debuted on August 22, 1983, after a run of only about 400 episodes for the Urbont theme!

While the basic look of the opening montage and closing end credit visuals remained the same, there were changes such as slower transitions from one clip to another in the opening cast montage and a thinner form of Helvetica type for the end credits.

From the fall of 1985 to the October 1986, a synthesized C Major arrangement of "My Guiding Light" was used over the opening, and different arrangements of the theme were used over an end credit "beauty shot." (The end credit beauty shot lasted until the spring of 1986, when Joseph Willmore took over as executive producer.) 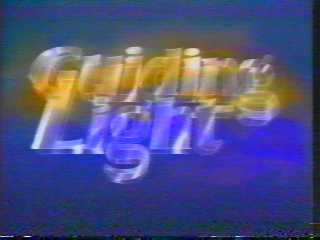 Part Six: The Fiftieth Anniversary and the Late-1980s

In October 1986, a high tech dance arrangement of "My Guiding Light" debuted over a new opening visual, which had the by-then familiar cast montage and the title of the show, in the same lettering design as that introduced in 1981/82, now set in a clear transparent glasslike sculpture against a blue sky background. The dance arrangement of "My Guiding Light" lasted until the summer of 1989, when it was replaced by a musical setting similar to 1985/86. 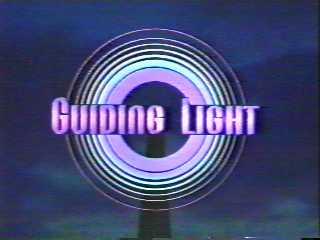 On January 2, 1991, Guiding Light changed to the first version of its current opening. The new sequence begins with a lighthouse whipping its beacon light around and around rather quickly. Each time the light beam comes around, we see an abstract circular light pattern that ultimately frames the title of the show in modernized silvery letters. The cast montage of this opening had a unique Knots Landing-style setup in that clips of the characters were contained inside rounded patterns that progressed from right to left across the screen, followed by the words of the title.

The new theme was "Hold On To Love" by Rob Mounsey, and the opening arrangements were in Bb Major. The slower closing version begins in A Major. After Michael D. Laibson became GL's executive producer in May 1995, he put in an island-flavored saxophone-dominated version of "Hold On To Love." This version lasted only about a month before being replaced by an electric guitar version that would open the show until early March 1997.

From 1991 to Early 1997, the end credits ran over a series of headshots of each contract player. The end credits remained in the Korinna semibold style.

In early March 1997, the full montage version of the Guiding Light 1991 opening was done away with in favor of a very short version with just the title and the lighthouse. 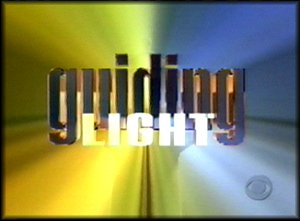 Guiding Light unveiled a new opening logo and theme song on June 24, 2002 (June 25 in New York City Area). The new main title sequence was created by Wayne Fitzgerald and his son and incorporated several familiar elements from the long version of the 1991-2002 opening. Brian D. Siewart composed this theme music.

With the June 24, 2002 debut of the new opening came the end of GL’s five-year old practice of running a brief scene between the main title sequence and the first commercial break.   (ATWT ceased this practice in the summer of 2001.)

GL changed executive producers near the end of 2002, as John Conboy replaced Paul Rauch.  New producer Conboy considered sprucing up his new show’s opening a priority.  Thus on February 24, 2003 (February 25 in New York and other “day behind” markets), a new opening debuted featuring clips from the show moving across the screen from right to left with the title of the show superimposed in all capital letters.  The title of the show appears in a font similar to this:

In an interesting twist, the new main title sequence ends with the first scene of that day’s episode.

The new opening theme music was composed by Rick Rhodes and Danny Pelfrey and is titled “True Light.”

Here is a list of Guiding Light's theme songs:

For more information about the career and music of GL theme composer Rob Mounsey, visit the Flying Monkey Productions website at http://www.flyingmonkey.com/.

Here are a few Guiding Light links you can visit:

You may also want to check out http://www.guidinglightsoundtrack.com/, which is the official site for information about Guiding Light’s music.