Loving and The City

The most recent soap opera creation of daytime legend Agnes Nixon went by two names: Loving from June 1983 through November 1995, and The City from November 13, 1995 until it ended in March 1997.

When Loving first premiered in June 1983, co-creators Agnes Nixon and Douglas Marland were determined to sell and write the show as a classic traditional soap opera for the 1980s. The show's very opening was part of this intended purpose.

By 1980s standards, Loving's first main title visual sequence was extremely plain and spartan. Against a sky-blue background, the title of the show zooms toward the viewer in a stylized script/italic font. This very brief and simple visual was accompanied by an old-fashioned sounding full orchestral waltz in D-Major in which the melody was carried by strings and woodwinds. This theme was composed by Michael Karp with lyrics by ABC musical mainstay Lynn Ahrens. The lyrics to the first Loving theme are as follows:

I was fine on my own,
Not too lost, not too lonely.
Who could know I was only marking time?
You knew.
All those years drifting by
You reached out and pulled me in,
And I felt my life begin
Loving you.

All those years I denied,
All those lies I accepted,
Kept my heart well protected
Till your smile broke through.
All those years without love
Till I finally took your hand
And you made me understand
Loving you.

Sweet as a rose
Turning toward the sun
You turned to me, we were one.

All that time, all those years
When I dreamed you would find me
With those tears far behind me
How my dream came true.
Now my heart and my love
And my years are yours to share,
All the years when I'll be there
Loving you.

Loving's original producer, Joseph Stuart, left the series in the spring of 1988 and was replaced by Ryan's Hope's Joseph Hardy. Mr. Hardy set out to contemporize Loving's look and sound, and the theme music and opening visuals introduced in March of 1989 reflected this move.

The new opening retains the 1983 logotype; however, there is now a series of charcoal and pastel drawings of people in love. These drawings interplay with the letters of the show's title. The orchestral, but much more upbeat, theme song accompanying these visuals is sung by Johnny Mathis and was written by Michael Camilo, Bob Israel and Bobby Daye.

During the brief less than two-year run of the Johnny Mathis Loving theme, the show changed executive producers twice. First, in November 1989, Joseph Hardy was reassigned to General Hospital and was replaced by Mary Ellis-Bunim. Then, only about five months later, Ms. Bunim herself was replaced by former All My Children producer Jacqueline Babbin, who decided to make her own changes. One of Ms. Babbin's changes was in the opening, which was less than two years old when it was retired in February 1991. Columnist Lynda Hirsch reported on Loving's opening change in the Feb. 3, 1991 Daily News of Los Angeles (page L24).

The new opening, which debuted on February 4, 1991, was quite glossy and consisted of the following montage:

This open, which still uses the 1983 Loving logotype lettering, is basically a sneak preview of the main title visuals One Life to Live would use from January 1992 to November 1995. The accompanying theme music by David Randall Lowe and David M. Shapiro, which was essentially a "New Age" abstraction of a sensual lovemaking atmosphere, had a sparse C-minor key arrangement of piano, synthesizer and softly played drums.

There was yet another change in executive producers on Loving the following July when Jacqueline Babbin was replaced by Fran Sears. This "New Age" Loving opening was destined for a very brief tenure. 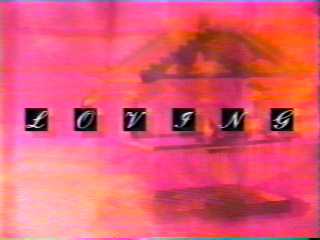 Look into my eyes.
I could use a little lovin'.
Take me in your arms;
Take me on to ecstasy.
The one thing we should treasure,
now and forever,
is L-O-V-I-N-G.

The new opening visuals that accompanied the theme song were mostly colored-tinted and featured cross fading and semi-transparent computer-generated background textures. There was also a completely new logo consisting of script letters contained in boxes.

During its final few weeks on the air, Loving had a serial killer bump off several characters.  According to some new information I have just received, the storyline had a special opening, and the narration went like this:

This is the sound of trouble. The kind that caress lives, even as it steals them away. That delicately unravels the fabric of entire towns like Corinth, Pennsylvania. When the trouble comes, it will sound like this. And Loving, will never be the same again. Trouble, with a capital L. Figure it out.

While this is being said, there are shots of different objects clicking. A pen clicking, a clock ticking, a gun clicking, a lighter case being shut, a purse closing, and an old fashioned camera taking a picture. Then there are the letters L-O-V-I-N-G cut out from magazines. Then, they are blown away. The final scene has the original Loving logo floating around like it is on a curtain that is blowing, with "Figure it out" on the bottom right corner.

I want to thank the contributor for this information.

Loving's end credits used the "beauty shot" format that was standard on Agnes Nixon's ABC soaps. As a scene related to what went on in that day's episode played in the background, the end credits ran in a Goudy Bold Italic font.

For a brief time after the Jeffrey Osborne Loving theme debuted, the beauty shot close was replaced by stylized visuals based on the 1992-1995 opening on one side of the screen and the credits, in a new smaller font, on the other side. Possibly due to an unfavorable reaction from viewers, that new February 1992 end credits format was scrapped in favor of a return to the beauty shot. By 1995, the end credits featured clips from that day's episode.

Here is the complete list of theme songs for Loving:

Loving gave way to The City on Monday, November 13, 1995, a soap that was going to have a decidedly youthful look and sound: young characters living in a big city loft, an alternative rock soundtrack, etc. Some of this show's production innovations (i.e. MTV-style camera shots and editing, "film-look" videotaping, and the like) received media attention and Emmy nominations. However, The City never caught on with viewers in a big way and ABC canceled it in March 1997. 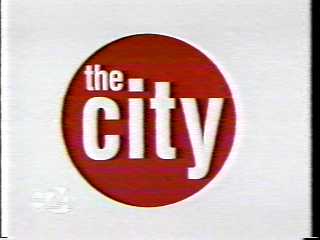 The Opening and Theme Song

The fast-paced opening starts with a puzzle-style piecing together of small night and day photos of sections of the New York skyline in a kind of photo mosaic. Following are shots of all the main characters in various New York milieus. Special effects used in the opening include photos ripping and "unripping" and paper crumpling into a ball and unfolding as the red circular logo containing the words of the title in all lowercase condensed Helvetica (?) type.

End credits for The City at first ran over stills from that day’s episode.  Later, the credits were run over various different exterior shots of Manhattan. End credits were set in all lowercase condensed Helvetica lettering.

The City is the only soap I know of that ever used a special alternative opening that tied into a particular storyline. In the summer of 1996, The City temporarily replaced its standard opening with a stylized sequence, which included an announcer reciting a rhyme that alerts the viewer to clues relating to a murder mystery. The rhyme is as follows:

In the city, someone who you think you know isn't who they seem to be. Jared was fooled, now he's dead. One by one, evil pranks unfold. Who's behind it? Can you tell? Be sure to look and listen well. And who'll be tricked next time? All the clues will be given in rhyme. Find out who's behind the Masquerade on The City. You only think you know.

This opening ends with a shot of a marble tile with the word "Masquerade" on it, accompanied by a carved out of stone version of the show's main logo on the lower right corner of the screen.

If anyone can provide some frame grabs from that "Masquerade" opening in a .JPEG (.JPG) file format, please e-mail me. Thank you.

The theme credit information is as follows:

Some Loving/The City Websites You Can Visit:

My "Loving" Files at http://members.aol.com/MartinM377/loving.htm.

The City Pages at http://www.amcpages.com/city/.

The City and Loving Page at http://www.anybrowser.org/soaps/city/.