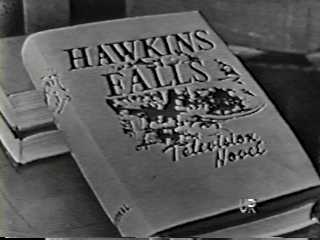 This main title begins with announcer Hugh Downs saying: "In Hawkins Falls, people say. . ." followed by one character making a comment on everyday life. After the character finishes, he/she puts a book down on a nearby end coffee table, and the book has on its cover the title of the show. The announcer then says, "Hawkins Falls, a television novel that tells the story of life in Small Town U.S.A."

In the closing, the announcer says, "We take you to Hawkins Falls each day, Monday through Friday, at this same time. . . This program comes to you from Hawkins Falls by way of Chicago."

I know that there were primetime and daytime versions of this show, but I do not know which theme went with which version.

The House in the Garden
(as a Kate Smith Hour segment) 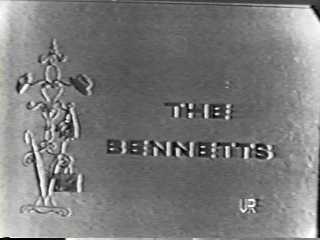 There's a drawing of a hat rack against a white background in this show's main title.

The World of Mr. Sweeney

A Time to Live

The Way of the World

A Date with Life

According to Christopher Schemering's Soap Opera Encyclopedia, the opening was a panoramic view of Philadelphia.

The theme song was "Kitty" by Carl Sigman.

The main title visual was the medical professional symbol of a staff with serpents set against a white background.

Theme #1 (Radio series and first few years of television version): an adaptation from Dohnanyi's "Variations On A Nursery Theme--Waltz section"

Accompanied by a shot of a tree, announcer Mel Brandt said over the opening, "From these roots grow branch, leaf, and flower, children of the sheltering earth, ripening into the tumult of the seasons--generation unto generation."

The House on High Street

I need information on the opening visuals.

I need information about the theme music and opening and closing visuals of this show. 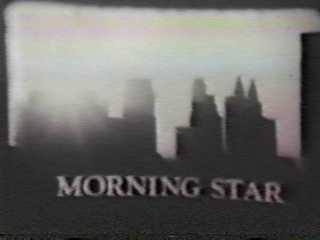 Against the backdrop of the morning sun shining through the silhouetted Manhattan skyline, an announcer says, "No matter how dark the night, there is always a new dawn to come; the sun is but a Morning Star. Morning Star--a dramatic serial for those who face today and look forward to tomorrow's promise.

This used the same theme music as the Peyton Place primetime television series and theatrical films: "The Wonderful Season of Love," a.k.a. "For Those Who Are Young and In Love" by Franz Waxman and Paul Francis Webster.

How to Survive A Marriage

As I can recall, the opening visual began with an abstract line graphic of a tree against a black background. This then dissolved into the title of the show in white Busorama typeface lettering.

Does anyone have a copy of an episode of this show? I could use frame grabs from the opening and closing credits.