When Ryan's Hope premiered on July 7, 1975, it differed from other soaps of the time in several ways. For one thing, it was set in a real life city, New York, instead of in a fictitious suburb of Chicago. Also, the main family was Irish Catholic instead of White Anglo-Saxon Protestant.

Ryan's Hope never had blockbuster caliber ratings, but it received enormous critical and industry acclaim in the form of Emmy Awards and Writers' Guild of America Awards.

Ryan's Hope used the same theme music throughout its entire thirteen and a half-year run: "Here's To Us" by Carey Gold.

Main title visuals for Ryan's Hope were always shot on location in New York City, and they were designed to help express the mood and theme creators Claire Labine and Paul Avila Mayer wanted for the show. As Manuela Soares put it in her book, The Soap Opera Book (1978), "There is a belief that characters can cope; that the human condition should be celebrated rather than merely endured." (pages 39-40) 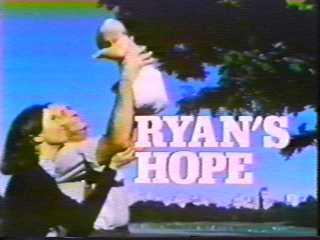 During the first few years of Ryan's Hope, the opening featured a mixture of stills and 16 millimeter film footage of the principal actors in character, all shot in character appropriate New York locations. The last shot of the original opening was of Johnny and Maeve Ryan lifting their then-newborn grandson John Reid "Johnno" Ryan up to the heavens as Carey Gold's "Here's to Us" plays in the background in a rather quiet strings, flute and harp arrangement. In The Soap Opera Book (1978), author Manuela Soares interprets the original Ryan's Hope opening by saying, "There is a belief that characters can cope; that the human condition should be celebrated rather than merely endured." (page 36)

There were actually three different opening variations used during the first years of Ryan’s Hope. During its first couple months on the air and again from the summer of 1976 until approximately the summer of 1977, the opening was a sixteen-millimeter film sequence of Johnny and Maeve with Little John.  This same opening sequence was redone as a series of stills by the fall of 1977.  The fall 1975 through summer 1976 opening featured still photos of all the principal characters.

The beginning of the 1980s brought numerous changes to Ryan's Hope and to daytime as a whole. Ryan's Hope's ABC Daytime stablemate, General Hospital, had just become a ratings blockbuster because of faster pacing, young storylines, and an infusion of action-adventure. There was growing pressure on Ryan's Hope, which had good, but not great, Nielsen ratings, to incorporate those modern elements that made GH a blockbuster. Also, Claire Labine and Paul Avila Mayer, while remaining headwriters of Ryan's Hope, sold the show to ABC outright, enabling the network to impose its will on the show 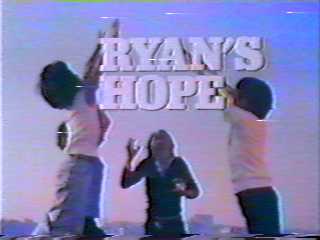 Soon after ABC took over complete control of Ryan's Hope, Carey Gold was replaced as principal music composer by General Hospital's Charles Paul, whose cues for the show from 1981 through the Summer of 1983 often had a GH style and sound. The opening was changed during this time also so that instead of shots of the principal cast members of Ryan's Hope, there were panoramic views of New York and shots of anonymous New York City people. This opening's shot sequencewas as follows:

5.      A kindergarten teacher walking her young charges down the street;

8.      A zoom-in on sunlight reflected on a glass and steel skyscraper;

9.      A wealthy young woman stepping out of a limosine;

10.  Another young couple embracing; and

The title appears on the screen after the freeze-frame of the boys tossing the soccer ball up in the air. There was a new, more uptempo arrangement of Carey Gold's "Here's to Us" theme with this new opening, which ran from March 3, 1980 (episode # 1211) until early 1983.  As for the theme arrangement, I think it was done by either Sid Ramin, who had taken over the music of All My Children by early 1980, or one of the staff composer/arrangers at Elliot Lawrence Productions.

After an absence of over a year, Ms. Labine and Mr. Mayer returned to Ryan's Hope as headwriters in early 1983 to try to arrest a ratings decline. The opening changed in February 1983 to once again feature shots of the main cast members playing the Ryans and their friends. And, of course, the opening main title footage was shot in locations around Manhattan. 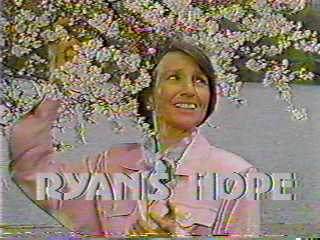 Between March 19 and April 2, 1984, there would be another more substantial change in the opening of Ryan's Hope. For one thing, the familiar theme, "Here's to Us," switched to an arrangement that had more of a discernable beat. The title logo also changed from Schadow Bold type to a type of lettering similar to that used in the opening titles of ABC's 1970s series Starsky and Hutch. (The exact name of this font is Advertisers Gothic Bold. (Click here for the infiniType website’s example of how this font looks.) This title logo was used until the end of RH's run in January 1989. During the last five years of Ryan's Hope's run, the opening began to incorporate more and more videotaped footage of the principal cast members until by 1988, the opening montage was almost entirely videotape footage.

From 1975 through the early fall of 1978, Ryan's Hope’s end credit lettering was in white Grotesque No. 9 Italic, and credits ran over a beauty shot or over a shot of an empty Ryan's Bar. From the fall of 1978 until at least the March 16, 1984 episode, end credit lettering was set in Souvenir Bold Italic. Credits again usually ran over either a beauty shot or a still of Ryan's Bar. Sometimes, however, the credits would run over a shot of a different empty set featured in that episode. By no later than March 1984, Ryan's Hope's end credits were set in the same Starsky and Hutch-style lettering of the new title logo, and they were now usually run over a series of stills from that day's episode.

Here are some links to Ryan's Hope web pages:

Ryan's Bar Online. I recently discovered a new website devoted to Ryan's Hope that has episode by episode synopses and other features. It is located at http://ryansbaronline.tripod.com. Check it out.