Santa Barbara only ran on NBC Television for eight and a half years, but it was notable for a number of things. Despite never being a ratings hit in the United States, it usually ranked very high in fan magazine popularity polls and was one of the first US soaps to hit it big overseas. Santa Barbara had a mixture of youth, glamor, sex appeal, melodrama, and humor that enabled it to become the first soap to ever win the Outstanding Daytime Drama Series Emmy Award three consecutive years. 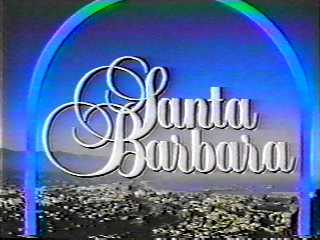 Santa Barbara had only one opening logo sequence throughout its eight and a half years on the air. This Emmy Award-winning opening, which was designed by Phil Norman, uses as a recurring motif a drawn Spanish Mission arch. That arch frames a series a photos that come at us that illustrate what life in Southern California is all about: a polo game, a woman sunbathing on the beach, a glamorous nighttime party, etc. The whole sequence ends with a panoramic aerial view of the city of Santa Barbara as the drawn Mission Arch dissolves into part of the script "S" in the title, which is itself framed by an arch.

Accompanying this logo was an upbeat mostly electronic theme by Joe Harnell.

End credits, which were set in white Korinna Bold type, ran over a different Southern California themed still photo or live action videotape visual each day. Santa Barbara was one of the few soaps that identified the writer of that particular day's episode in the end credits.

By the way, I should point out that according to an article in Soap Opera Weekly in early 1993, Paul Rauch, who was Santa Barbara's last executive producer, was planning to change the show's opening visuals and theme song. The new opening would have debuted at the beginning of 1993 if Santa Barbara hadn't been canceled. NEW INFORMATION: Mr. Rick Rhodes recently contacted me and he has this story about the proposed new Santa Barbara theme:

I believe that the song we wrote was called "Paradise". We had a vocal version and an instrumental version. It just wasn't meant to be.