A. The Early Years 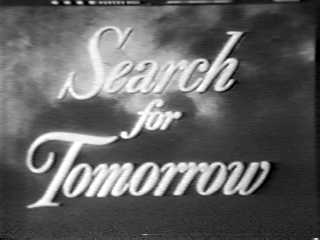 Throughout its entire thirty-five year run, Search for Tomorrow's opening logo consisted of a time-lapse shot of clouds floating through the sky. The title of the show was superimposed over the visuals in an italic typeface, probably Baskerville or Garamond, that featured a swash-topped T. This sequence was presented in black and white from 1951 until the Spring of 1967, when the show began regular color broadcasts.

The theme music for the early years sounded a little like "Beyond the Blue Horizon" to some. (In fact, "Beyond the Blue Horizon" would have seemed quite appropriate for this show given the opening visuals.) I don't know exactly who composed the long-running early theme music of SFT, but I do know Chet Kingsbury was the organist for the show's first episode and that Bill Meeder was the organist for several years during the fifties and sixties.

End credits during this period usually flashed on and off the screen as separate cards, with the actor/crew member name in a typeface such as Garamond and the role played/production title in a sans-serif typeface. 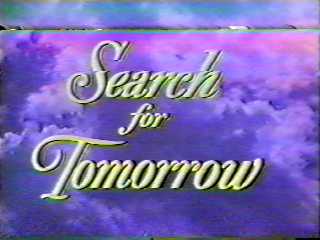 The familiar time-lapse shot of the clouds floating through the sky was now in color, the lettering was gold, and the "S" in Search now obtained a swash flourish. During these years, an original theme by Bill Meeder titled "Interchange" was used as theme music.

As of Spring 1974, Search was one of the few remaining soaps that had live in-studio organ accompaniment. However, Score Productions did the music for this show for a brief time before Elliot Lawrence Productions took over.

End credits during this period were originally in a News Gothic typeface, then later appeared in a Grotesque Italic font. There are indications that by 1981, Search was again setting its end credits in a Helvetica/News gothic type similar to what was being used on the other CBS Procter and Gamble soaps at that time. 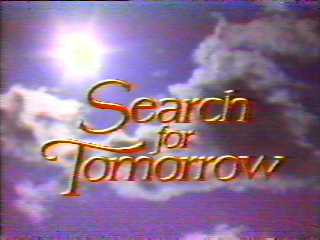 All the Procter and Gamble soaps underwent a major cosmetic facelift by the end of 1981, and Search for Tomorrow was no exception. Search's glitzy new videotaped opening sequence began with a shot of a seagull flying over the ocean, followed by a helicopter shot of the clouds in the midday sky, and then the appearance of the show's title in shiny golden Americana typeface lettering. The sun appeared in the upper left hand corner of the screen. This sequence, which was accompanied by a new Latin disco arrangement of "We'll Search for Tomorrow" that prominently featured a Chuck Mangione-style solo trumpet line, on Dec. 23, 1981. 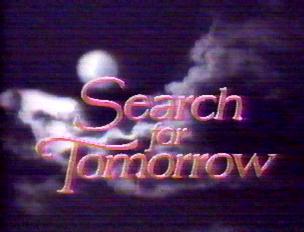 End credits were set in the following type during these years: Helvetica/News Gothic "flashing separate card" setup during the final weeks on CBS and the first few weeks on NBC; Grotseque Italic, usually white, from Summer 1982 to Early 1985; and Belwe from Spring 1985 to February 1986. 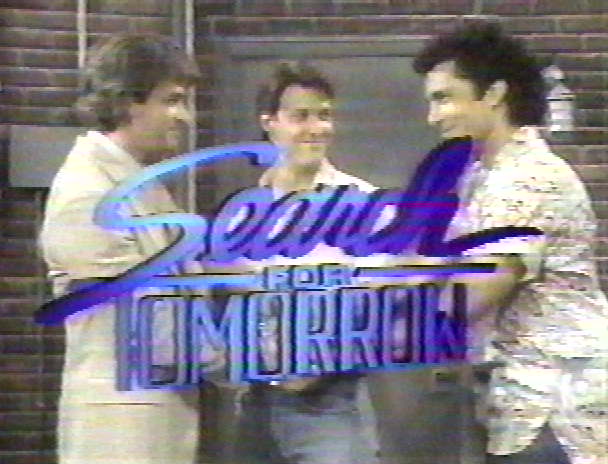 Search for Tomorrow's cosmetic look underwent one last overhaul in February 1986 under executive producer John P. Whitesell. While the traditional clouds in the sky motif remained in place, there was now a montage of cast clips in the opening. New "techno-rock" theme music by Billy Chinnock ("Somewhere in the Night") was used along with a new high-tech lettering style in the title. The word "Search" was in script while the other two words of the title were in high-tech sans-serif lettering.

When this final main title sequence first debuted, the end credits were set in Friz Quadrata type, but changed to white Windsor typeface letters by the summer.

Here is a complete list of all the theme songs used by Search for Tomorrow:

Back to CBS Page