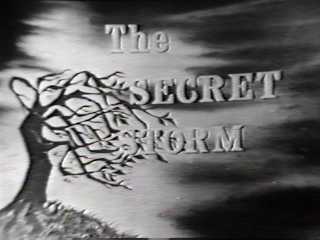 When The Secret Storm began its run in February 1954, its original opening visual consisted of a drawing of a tree with windblown branches and leaves, and the title logo was in Latin Bold type. The opening theme music was a rather eerie-sounding piece in C-Minor played on organ and piano. This opening/closing theme music was used until around 1970, but the "windblown branches" visual had a relatively short run. 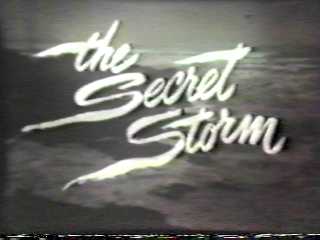 Starting by no later than 1960, The Secret Storm opening and closing sequences consisted of a shot of waves crashing on the shoreline. The title logo for this visual was in upswept brush stroke script. The theme music remained the same as that which accompanied the previous opening; but in the 1960 Secret Storm episode I've viewed, the performance of that theme on the organ had more of an echo effect.

From 1954 until at least 1960, the end credits were set in a combination of Latin Bold and, possibly, Garamond type. Approximations of the look of the end credit lettering are as follows:

According to John Kelly Genovese, The Secret Storm briefly changed its opening to a Peyton Place influenced series of "town exterior" shots. This new main title proved unpopular, however, and the producers quickly returned to the crashing waves on the seashore for the remainder of the show's run.

In addition, for a time in the mid-1960s, The Secret Storm incorporated this closing epigram:

You have been watching The Secret Storm, the story of the Ames family and of deep-rooted human emotions, and how these emotions are stirred up into becoming 'the secret storm.' All his life Peter had believed in honesty, kindness and justice--qualities which have brought him into conflict with both members of his family and friends. The children are grown and married now, and they often turn to Peter and Valerie for advice--but ultimately it is the individual who must solve his own problems.

By the 1965-1966 season, The Secret Storm changed to a new theme that was used over both the opening and the closing credits: Charles Paul's adaptation of Brahms' "Concerto in A Minor, 2nd Movement."  Based on my correspondence with ASCAP, the Brahms adaptation ran until the spring of 1973. Then, according to Craig W. Pattillo, it was replaced by an original theme by Eddie Layton. From listening to the 1973/74 season Secret Storm theme at the ThemesOnline website at http://telesearch.org/themesonline, I could tell that that last theme started with a few notes from the Brahms adaptation, followed by a wholly original tune played on piano.

I've seen the video of the 1966 Secret Storm opening and closing on the "World of Soap Opera Themes" website. That video shows an interesting end credits treatment. Each credit card, which has lettering in a Helvetica font, is swept off the screen by the crashing waves on the shoreline.

Here is a theme song history for The Secret Storm: