The Young and the Restless

The Young and the Restless premiered on CBS on March 23, 1973, and it almost immediately became the most influential daytime drama of its time.

The opening theme song for The Young and the Restless originated as a music cue called "Cotton's Dream" from the 1971 movie Bless the Beasts and the Children. The song was later retitled "Nadia's Theme" after Romanian gymnast Nadia Comaneci used it for her floor exercises in the 1976 Olympics. Whatever its title, this song, composed by Barry DeVorzon and Perry Botkin, Jr., is the only theme music The Young and the Restless has ever used. The original early 1970s arrangement was used for the opening and closing until December 23, 1999. The lyrics of the theme are as follows:

Starting on Friday, December 24, 1999, a saxophone-dominated setting for the theme was unveiled, marking the first major change in the sound of Y & R's theme music.  This saxophone theme was used until March 2003, when a full orchestral version of “Nadia’s Theme” was reinstated.

The opening has always included a "cross fading" montage of every current contract cast member. Until the 1987/88 season, the montage was in the form of ink or pencil drawings. (The drawings were used in the Y&R opening as late as the 1987 Christmas episode.) 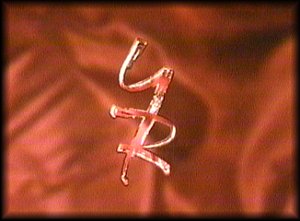 However, on December 24, 1999, a new opening sequence featured the live action shots of the cast members against a swirling red satin curtain backdrop. Also, in an almost unprecedented move, the names of the actors appear in white Nuptial Script type with the pictures.

The Young and the Restless celebrated its 30th Anniversary by unveiling a new opening on Friday, March 25, 2003, in Canada and Monday, March 28, 2003, in the United States.  This new opening, which was created by a company called Autonomy, which did main titles for The West Wing and Third Watch, brings back the predominantly white backdrop color scheme of past openings. Stylized black and white visuals of the cast members are given white letterbox framing.

The stylized brush script Y&R logo appeared on licensed merchandise as early as 1982, but it didn't appear in any on-air opening sequences for the first time until January 1984.

For many years, the Y&R end credits were set on the left side of the screen; on the right side would be either a group of drawn cast portraits (1973 to 1983), the stylized Y&R brush script logo (1984 to early 1990s) or computer-enhanced live action poses of cast members (up to July 1999). In most overseas markets, Y&R continues to show a traditional long crawl instead of "squeezed" end credits, but a new look for the end credits debuted in December 1999. Y&R has a red background pattern similar to its opening - only the closing theme is performed by electric guitar instead of the opening's sax. Fans in the United States have to put up with the generic "squeezed" credits consisting of CBS promos.

Here’s some additional information about Y&R’s opening and closing graphics:

Young And The Restless.  When their opening was changed in 1999 with the swirling red background, the ending was changed as well and continues to air in Canada and other foreign markets.  They feature the Y&R written logo painted out in white, like it originally was, on the right hand side with the credits scrolling on the left hand side in the same font used on the previous credits.  The theme is changed for the closing.  Instead of the modernized sax version of the theme, like the opening, the closing theme has the sax replaced with an electric guitar (which sounds FAR superior IMHO).

Also, for their old Christmas shows.  The end credits and 30min eye catch were changed.  Instead of featuring the white background with a piece of the theme, they featured a background visual of a train going around a Christmas tree with "The Young And The Restless" and the credits spelt out in red text, still using the standard font.  And played an instrumental version of "Jingle Bells" as the theme.  The openings for these episodes remained unchanged.

Thank you very much for this information.

Here are a few Y&R-related websites you can visit:

Mary's "The Young and the Restless" Fan Site at http://www.rollanet.org/~mary/yr/yr.html

Soap City: The Young and the Restless at http://www.spe.sony.com/soapcity/yr.